The Camera Module is a custom designed add-on for Raspberry Pi. It attaches to Raspberry Pi by way of one of the two small sockets on the board upper surface. This interface uses the dedicated CSI interface, which was designed especially for interfacing to cameras. The CSI bus is capable of extremely high data rates, and it exclusively carries pixel data. The camera is connected to the BCM2835 processor on the Pi via the CSI bus, which travels along the ribbon cable that attaches the camera board to the Pi.
The camera is supported by the latest version of Raspberry Pi OS, which support using libcamera apps to capture images. 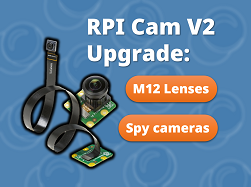 Use M12 Lenses on Raspberry Pi Camera V2 with Ease for Wide Angle, Telephoto and Macro Shooting, or Even Turn It into a Spy Camera

Give the Official Raspberry Camera an Upgrade Consumer Electronics is more or less about pushing specs to the limit, so consumers can always buy newer and more powerful gadgets when they want it. In a Read more…

Note: For the sample order, please order the lens you need to replace separately and Contact us in advance for customization if you would like to replace the lenses in bulk.