The Raspberry Pi Foundation surprised the community with its release of the 12MP Raspberry Pi High Quality Camera at the end of April. It’s a new game-changer for the Raspberry Pi cameras, but may also be too new to buy with full confidence for the uncertainties. We may finally get to know it as more makers get their hands on it, but Arducam wants to give a quick response to the questions and concerns about this brand-new camera module we’ve recently received. Here is the Top 5.

Raspberry Pi High Quality Camera NoIR – Is there an easy way out?

This HQ camera comes with an IR cut-off filter to block the infrared and “ensure the outdoor photos look more natural.” A common board-level camera depends on the lens for the IR sensitivity, more specifically, on the IR filter at the bottom of the lens. However, the IR filter of the RPi HQ camera is glued to the lens holder, or in the official term, on the “main housing.” That assembly is similar to our camera modules with switchable IR-cut filters, except that it’s not switchable.

Therefore, there are possibly 2 ways to alter the IR sensitivity of the HQ camera module – you can change the lens holder (main housing) as a whole, or remove the filter by following the official guidance. Either way, it does not seem like an ideal solution, and here is why:

Firstly, if you want to take off the original housing and replace that with a new lens holder, you need to make sure that you can fix it to the camera board by screwing bolts into the mounting hole. However, it seems like the HQ camera adopts a customized standard with a hole spacing of around 24-25mm, which means it’s highly possible that there are no ready-to-use replacements on the market. It’s feasible to 3D-print a lens holder but could be much less robust.

To conclude, there is no out-of-box experience for NoIR applications like the V1/V2 cameras offer. You will have to choose the 3-party manufacturers that build Pi-compatible IMX477 Camera Modules, like Arducam. You can either request a customization of the NoIR version from us, or easily remove the IR filter yourself.

The lower-end lens recommended for the HQ camera has a 3MP mark on the top, which has raised lots of controversy among the community. However, that is an unavoidable concession for the balance.

We can pretty much say that no manufacturer will ever be willing to produce a CS-Mount lens exclusively for the Raspberry Pi High Quality Camera. After all, it’s such a trivial part when you consider how massive the whole video surveillance market is. Even if a manufacturer targets this exclusive segment, the price of the final product will be absurdly high. That price will put it in an awkward place where it’s too expensive for the Raspberry Pi ecosystem and less popular than the other compatible lenses, so the whole idea is just not feasible.

Therefore, the best way for the HQ camera to accommodate a cost-effective CS-Mount lens is to borrow from other fields, more precisely, the CCTV lenses for video surveillance. In that field, a higher-resolution lens does not make a huge difference, because most videos recorded for surveillance are 720P, 1080P, and 2K, respectively 1MP, 2MP, and 3MP. You see, the 3MP mark means it’s designed for a camera that supports up to 2k video recording, and that’s pretty decent in this way.

On the other hand, the 3MP mark on the lens never means it will output the same 3MP picture quality for different image sensors. You can still get a better picture quality on the same lens with a higher-resolution camera. I’m pretty confident to say that because we’ve covered a full product series of 0.3MP to 18MP MIPI cameras for the Raspberry Pi, and we are pretty sure that the lens is not a huge handicap for most Raspberry Pi compatible cameras.

In short, although some may think that there’s no point selling a lens marked 3MP for a 12MP camera, but I think most will not accept a $500 12MP C/CS camera lens for a $50 camera module.

The Jetson Nano is released with the native support of Raspberry Pi Camera V2, so some people assume that the latest HQ camera may also work with the Nano. Can it? Well, it was not able to, but with the recent driver updates, the IMX477 works with the Jetson Nano and the Jetson Xavier NX. ​

That being said, if you want to use the official Raspberry Pi High Quality camera on the Jetson platform, there is no out-of-box experience because you must manually remove a resistor from the official camera board yourself, otherwise it won’t work.

If you don’t want mess with all the hardware reworking and just want to use the IMX477 in an easier way, check the IMX477 camera modules from Arducam, which works without any hardware modifications and provides more flexibilites.

In the beginning, you cannot use the Raspberry Pi High Quality Camera with the Jetson Nano, and the reason is simple – there were no drivers! We’re pretty sure that it’s impossible for the Raspberry Pi Foundation to build drivers for the Jetson nano community, because why would they?

Fortunately, the driver for the IMX477 is already out, and we’ve also had that on our GitHub. Here is a video demonstrating the IMX477 on the Jetson Platform using Arducam IMX477 Camera Modules for the Jetson platform.

HDR is one of the highlight features for IMX477, it uses DOL-HDR which called “Digital Overlay High Dynamic Range” technology. When DOL-HDR mode is enabled the IMX477 can output different exposure frames within an HDR frame cycle. For example, in DOL-HDR 2 frames mode the two differently exposed frames are overlapped in the line-by-line pattern, the same line but with different exposure time. It allows the backend ISP to merge these two frames into a higher contrast image and make the HDR image looks more like what the human eyes see.

Unfortunately, the Raspberry Pi VideoCore IV GPU core’s ISP was designed many years ago and there are no big improvements in the past few years, it is sad to find that it doesn’t support HDR feature. For the same reason, the H.264 encoder only supports [email protected] which is a little bit outdated compared to the mainstream H.265 [email protected]

By the way, the Jetson nano and Jetson Xavier NX supports 4k video and 1080p 60fps with the IMX477. Looking forward to the new generation Broadcom GPU to support these new features in the near future.

We’ve heard many complaints from drone users that the CS or C mount lens will be too bulky for their applications, and they want a smaller lens, preferably m12 lenses as they’ve used before with Arducam IMX219 series.

For now, the best solution is a CS-mount to M12 mount adapter, which will at least allow you to accommodate an M12 lens on the HQ camera module. Arducam happens to sell those adapters so we’ve tested them with many of our M12 lenses. The followings are some of our suggestions if you want to use M12 lenses on the IMX477.

Even if you’ve successfully mounted the m12 lens on the HQ camera, it does not mean it will work without issues. The smaller M12 cameras offer a smaller lens optical format, which could be insufficient to cover the whole image sensor area, leading to dark unexposed pixels around the corners. If you are not clear about this, learn from this page about how should the lenses and sensors match.

Therefore, we’ve been selecting and testing M12 lenses for several days to sort out the best M12 lenses for the HQ camera with different focal lengths, so our users will not have to worry about the compatibility.

If you are a Jetson user, you have another option: Arducam provides a compact-size IMX477 module with M12 lens, which is the same as the the Raspberry Pi camera Module V2.

Is there anything you want to know or want Arducam to do about the Raspberry Pi High Quality Camera? Leave a comment below.

Could be worth mentioning the B0164 (Arducam 18MP AR1820HS Color 1/2.3‘’ CMOS Color Rolling Shutter Camera Module for Raspberry Pi).

Hi,
Just a thing I want to be sure of, is the HQ camera compatible with both your usb shield (usb 2 and 3)?
Thanks, 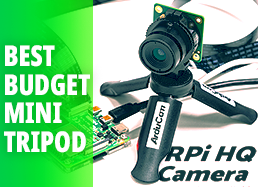 The HQ camera with C/CS-Mount is a big step forward Lens is a crucial part in a camera system that needs flexibility. A single lens cannot meet all needs because the use case varies from Read more…

Interchangeable lenses officially introduced to Raspberry Pi cameras The Raspberry Pi is a versatile minicomputer for makers to build all kinds of projects, but its official camera modules are less so. Great as the V1 Read more…