Update: The Two MIPI-CSI Connectors on The New Jetson Nano Carrier Board (Rev B01 Kit) Are not Technically Synchronized

Although recently NVIDIA has released a new revision of Jetson Nano board B02 with two camera slots, we found that it’s not a perfect upgrade.

After some tests, we have figured out that it’s only possible to sync the dual camera on the Jetson Nano B02 with two externally triggered global shutter cameras. Therefore, Arducam is planning to develop a new board in the form of HAT to resolve this issue.

You can learn more about this issue in the following blog: 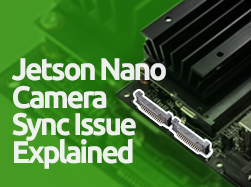 Synchronized or Not? Issues & Solutions About the Two Camera Connectors (J13 & J49) on Jetson Nano B01 Dev Kit

The latest Jetson Nano revision offers several hardware modifications, including an extra camera slot, as we’ve mentioned in our breakdown of the B01 carrier board changes. This change may imply that the NVIDIA embedded group Read more…

Camera multiplexing and stereo vision are not as easy as building a camera PCB, especially on embedded single-board computers like the Raspberry Pi and Jetson Nano. Few companies can take the challenge, but fortunately, Arducam is one of them. After years of work on multi-cameras solutions ranging from SPI, MIPI to USB, Arducam have released a stereo camera HAT to enable a truly synchronized experience.

The Arducam stereo camera HAT was initially designed for and tested on the Raspberry Pi platform to tackle the unresolved “single camera port” issue. It tricks the Pi board to treat it as if only one camera is connected. The new HAT delivers decent stereo vision experience on standard Pi boards and opens possibilities for new Pi-related projects such as depth mapping.

To take a step further, we’ve decided to keep an eye on the Jetson Nano platform. It comes with similar interfaces to make it feasible, but better specs to make it more powerful. Today, the efforts from our intelligent engineers have finally paid, and I’m thrilled to announce that the Arducam Stereo Camera HAT has made a breakthrough to work with the Jetson Nano.

Here is a demo video showing how the Arducam Stereo Camera HAT is working with the Jetson Nano to generate stereo images:

Use Any Module You Want

One thing great about the stereo HAT is – it’s a HAT. While “HAT” may sound like a Raspberry Pi glossary, it’s still great flexible hardware for the Jetson Nano. A HAT is a bridge instead of an alternative, so you don’t have to ditch your preferred camera module just to try the stereo feature. It would now be possible to stick to your original CMOS but with doubled pleasure.

However, if you do want to try another camera module, check those from Arducam. We have a series of IMX219 modules for the Jetson Nano, ranging from wide-angle to autofocus modules, and even a sensor extension cable to make it a spy camera. We also provide all kinds of M12 lenses in different angles of view and distortion rates to fit our camera module.

In the near future, the Arducam MIPI camera module series will also be available on this platform, so you will be able to use another wide range of MIPI cameras from global shutter (up to 2MP) to high definition (up to 18MP) cameras on the Jetson Nano.

As mentioned above, the Jetson Nano comes with similar interfaces with the Raspberry Pi, but powerful specs, and it would serve better for all kinds of embedded vision and computer vision projects, like robotic vision, depth mapping, and so on. All these projects would possibly require multiple cameras, but with Arducam Stereo Camera HAT, you can achieve on the Jetson Nano what would be expected on a TX1/TX2.

This is vary cool! Where i can buy the Nvidia Jetson Nano stereo camera HAT?

It’ll be available soon.
Updated: you can get one from our top distributor UCTRONICS here.

Excellent!
Is this stereo HAT available for both Jetson nano and Raspberry Pi 3B?
I have both so it would be promising if I could apply this Hat to both of them!

Yes, the camera board works with both Pi 3B and Jetson Nano.

Very interested in this product. Can I just use the RPiv2 camera modules (mounted on the stock PCB and the infinity focused lens) instead of using the stereo PCB shown above (where I cannot control the camera distance)?

With some soldering, you definitely can use two Raspberry Pi V2 modules with it.

Is it available now ?

Yes, you can get one from UCTRONICS.

Looking forward to get it, where can I buy?

You can get one from UCTRONICS