Wanna Use Synchronized Dual Camera for Raspberry Pi 4 or Stereo Camera HAT for Pi 3B+/3? Arducam Makes Them All Come True

Two camera Solution on pi 4, 3B+ and 3 – What you need to know about the background

When we talk about a new two-camera solution on RPi, we have to mention the background of the stereo Pi camera on this popular open-source hardware platform. For a long time, advanced users of the Raspberry Pi community want to take video or images from multiple cameras simultaneously for 3D vids & pics, face/object detection, stereo robotic vision or advanced surveillance and live-streaming applications, so they want a real stereo camera for raspberry pi 3, 4, and other standard Pi boards. It was an unresolved problem limited by the RPi’s hardware design because the standard Raspberry pi models only have one camera port. Although Arducam has multi-camera adapter boards that let you connect up to 4 cameras to a single pi board, it only actives one camera at a time, and you have to switch between them.

The other alternative is to use network-based synchronization, but you still have to use one Raspberry pi board for each camera setup, and the capture process is still not at the exact same time which will introduce the movement or artifacts between multiple images.

Now Arducam released a stereo camera HAT for Raspberry Pi which allows you to connect two 5MP OV5647 or two 8MP IMX219 Pi cameras to a single standard Pi board and takes images or video at the same time. More importantly, this binocular solution makes both cameras fully synchronized. The highlight of this stereo camera HAT is that it incorporates the Arducam proprietary ArduChip solution and extends the usage of the single pi camera port, and it cheats the Raspberry pi as if only one camera connected. It supports and is fully compatible with Raspistill commands for preview, and Raspivid command for video capture/processing with RPi’s default camera driver for its 5MP and 8MP cameras.

With the latest Pi 4’s hardware, Arducam makes more camera applications possible for Raspberry Pi 4. This new HAT also supports other Arducam Raspberry Pi cameras and proprietary camera driver that works up to two 16MP, and as the Pi 4 is much more powerful, you can not only shoot two pictures at the same time. With the shared oscillator and I2C broadcasting, the two cameras are fully synchronized in the nanosecond level. These features are excellent for a lot of applications, such as 3D Vision for IoT or panoramics photos and videos. Combined with a nice fisheye camera from Arducam and some image processing software, you can stitch a wonderful panorama with higher resolution and better accuracy.

So what is the point of two cameras? The short answer is you will get different information from each camera, and if it’s fully synchronized, it is real-time. The information difference then could be used in applications like distance and depth mapping. To put it simply, this is also a bionic solution because that’s like how eyes work. If you are a user of Google’s camera app, you might have used the “Len Blur” feature in it, which requires you to lift up the camera to take pictures, and that is also image information difference. In this feature, it calculates the distance to decide which object is in the front to stay clear and what else should be blurred in the background, so you can have a picture that seems like it’s from a DSLR lens. However, that is only a simple application used in our daily life, and you can have much more fancy projects like 3d modeling and AR/VR Cameras for Raspberry Pi 4.

That being said, it would be much easier to see what the stereo camera HAT is capable of with a demo. We’ve done a depth mapping demo with this camera HAT and our stereo camera board. Read more from this product’s documents page below if you are interested in this application.

Introduction The Arducam Stereo Camera HAT is a revolutionary product that enables you to use two synchronized Pi camera modules on a single standard Raspberry Pi model. The stereo camera setup could be used in Read more…

Aside from this hat’s document page, you can also read more about it on the product page below. You can contact us at [email protected] if you want to purchase this item.

To confirm, this would not be compatible with the [B0163] Arducam IMX135 MIPI 13MP Color Camera Module for Raspberry Pi?

We’ve been working on it.

Whats the timelines looking like for the first hats? And can will I be able to order individual ones before bulk ordering?

You sure can order a sample to run tests before making a bulk orders. About the timelines, please refer to the documentation.

what is the price of this camera ?

You may find the price here

Would I be able to use this to connect a pi and a pi noir to a jeston nano? Or is there a better solution for this?

If you want to connect two pi NOIRs plus this board to the Nvidia Jetson Nano, yes.

Would it already be possible to receive a prototype to run a test with? Or do you have any estimated time when they’ll be available for ordering?

It’s a shame, I can’t seem to find any of these in stock anywhere. :V

FYI, the 5MP version and the 8MP version.

Do you know if both version you posted work with the Nvidia Jeston Nano?

Yes, both of them can be used with Nano.

Is this stereo HAT compatible with Picamera API?

Split screening/resolution with two official V2 camera modules or our imx219/OV5647 modules, yes.
If you need full resolution, no.

Will these be sold as just the HATS? or if you are only going to sell them in KITS will there be a combo of some of your cameras that support full resolution split screening?

I’m interested in the potential to have a single Pi run multiple cameras in a 3D printer enclosure and live stream it to YouTube. I need camera modules that can be separated and not tied together.

You can get the bundle, or just the HAT and pick any two RPI cameras, solder them up and you are good to go.

Where can I find documentation for the board?

Is there a timeline on getting these for the Jetson Nano?

We have done it.

Do you sell this board as a standalone not as a bundle?

Can we use opencv to control the cameras with this setup?

I bought two OV5647 fisheye 175 degree camera with 22pin. Does it able to connect using 15pin to 22pin FPC cable? Does all cameras need to go through rework instruction with those jumping wires?

Yes. Instructions can be found here

Hello, can I use use this hat on raspberry pi 4 and have two cameras sending video stream to two displays? I want to have one camera on one display and the second camera on the second display in fullscreen.

Hi there, I was wondering if the modification documented for 8MP V2 Pi Camera (https://www.arducam.com/docs/cameras-for-raspberry-pi/synchronized-stereo-camera-hat/sync-stereo-camera-hat-user-manual/), consisting in removing resistors and wiring the two cameras is a suggestion to improve the signal or is it mandatory?
Will it work if I don’t modify anything in the two camera sensors? Thanks

Hello, how far can be each of the camera from each other? I would need them to be at about 3 meters of distance.
Can be done?

In the case that I use this hat on raspberry pi 4 and have the two cameras sending video stream to the two displays, I need two HDMI cables coming out of the raspberry pi 4, one for each display?

If you need to use two displays showing different contents on the Pi, then you will be needing two HDMI cables, regardless of what HAT you are using.

Is this compatible with the new Raspberry Pi HQ Camera?

We’ve made it for dual sync cam with Pi HQ camera, and please check this video here: https://youtu.be/WtfhN2yPW4A

@Lee: is it possible to use 4 cameras synchronized? I’m about to build a “bird-eye-view”, and it needs 4 simultaneous cameras, with literally 0 latency, and with very good framerate above 20fps, but the resolution can be reduced (4 cameras shall be FHD altogether).

We’ve finished the prototyping and in the middle of the product launch. The HAT to sync 4 cameras will be named Arducam camarray HAT, and you can see from our Pinterest to get an idea of what the product will be like: https://www.pinterest.com/pin/805018502130169305/

I have a need for a 4 camera system where each camera needs to be aimed in a different direction. Can each camera be placed on a separate board to facilitate this setup?

Theoretically, the cameras could be placed on separate boards, but that should require the camera board to be customized.

When will these be back in stock, I cannot seem to find them from any seller worldwide or in the US.

We have been distributing the synchronized stereo camera hat in 5MP and 8MP bundles, and distributors like UCTRONICS have these bundles in stock.

Yes you have for the stereo camera but the b hat with synchronized camera is not. My use case is similar to the one shown in the video. The ability to see forward and backwards at the same time.

I wish to use 2 synchronized cameras to pi 3B, 1 camera with enough high resolution to capture number plate of a car and second camera must be thermal or Noir camera which can detect heat coming out of exhaust pipe of a car. Can this possible from this module?

The Arducam Synchronized Stereo Camera HAT is designed for synchronizing two cameras with the same model.

Hello – would this be suitable for a remote call setup that points one camera at the participant’s face and the other at their hands / table top, and sends the video for both via separate jitsi meet webcalls? Is it possible to get the cameras about 30 cm apart? Thanks in advance.

Hi, where can i find the scheme to connect the two imx477 cameras like in the video you have already shared (https://youtu.be/WtfhN2yPW4A)? I need to use the two stereo cameras synced in order to have a side by side with at least 30fps, very low latency and at the higher resolution possible. Thanks

Do raspi4b, arducam synchronized stereo hat and imx477 cameras work together or do I need special software. ? Thanks

Hello, Can we use this on standard V4L2 and OpenCV video capture ?

You can refer to this demo of Depth Mapping on Arducam Stereo Camera HAT with OpenCV.

Arducam IMX477 on Raspberry Pi: the need for lighter weight and smaller size We have released two different products to meet the diverse needs of our customers. However, as more people got their hands on Read more…

Many people perform computer and machine vision tasks on RPi, in which they have to deal with fast-moving objects. A global shutter camera is an ideal solution to avoid the rolling artifacts for better image Read more… 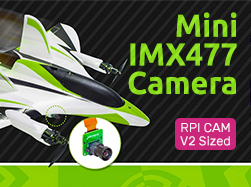 Arducam IMX477 on Jetson: the need for lighter weight and smaller size. After the release of the Raspberry Pi HQ camera and the breakthrough in the IMX477 Jetson driver, the market has seen an increasing Read more…