The Raspberry Pi 4 Model B has been released on Jun 29th, and now you have access to up to 4GB of memory and 2 USB 3.0 ports, and that means a lot for Raspberry Pi 4 projects, especially for camera applications. With a boost in its performance, this long-anticipated Raspberry Pi sets a new standard for single board computers, and at the same time sets a series of opportunities and challenges for Arducam to face. 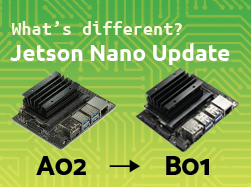 Jetson Nano’s New Compute on Module (CoM) and Carrier Board

Nvidia Jetson Nano Has Updated Its Hardware Released in March 2019, the NVIDIA Jetson Nano immediately prevailed in the maker community with its desirable price-performance ratio in AI applications. It provides an AI performance of Read more…

After proving the feasibility to use Arducam Stereo Camera HAT for depth mapping on the Raspberry Pi, we’ve moved on to the Jetson Nano platform. This blog mainly discusses the application on the Jetson Nano Read more…