To complete this demonstration, you need the following items:

Due to the over height of Arduino Yun USB connector, the ArduCAM can not mate with Yun like other Arduino boards. So you need extra long pin single row female socket to raise the ArduCAM. You need few 6pin, 8pin and 10pin female sockets and break it like the picture shown. Stack up the sockets on the ArduCAM pin header like this.

Next, plug the ArduCAM shield on top of the Arduino Yun board.

Finally, plug in the OV2640 camera module to the camera socket and plug-in micro SD/TF card on the ArduCAM shield. Note that the camera has four extra pins, so you need to align the pin on the left.

According to the requirement of the ArduinoBridge library, you need to create an “Arduino” directory in the root directory of the micro SD/TF card, in this case, the Arduino Yun can recognize the card.

Download the latest ArduCAM library from the link https://www.arducam.com/download.

Extra the files and copy the UTFT4ArduCAM_SPI and ArduCAM directories to the directory of Arduino/libraries where you have installed the Arduino IDE.

Open the File->Examples->ArduCAM->ArduCAM_Yun_OV2640_Digital_Camera example sketch. By select the proper Board type and correct the Port number, then press Upload button to upload the sketch to the Arduino Yun board.

After upload the sketch, you can see the LCD screen refresh from white to black and display the preview video on the screen. Wait for few minutes for the Arduino Yun booting up, you can find a WIFI connection named Arduino Yun-XXXXXXXX on your computer. Please view the guide to link with the Yun board ArduinoYun Guide.

After you successfully connect your host PC to Arduino Yun board, you can use SSH tools SmarTTY to login the command line on the Yun board.

Typing command below to add symbolic link to the directory DCIM in the microSD/TF card.

Press the shutter button on the ArduCAM shield to take several photos. Then open the Arduino Yun webserver link http://192.168.240.1/DCIM to check the photos just taken.

How to connect ArduCAM shield to MEGA 2560

Arduino beginners often face compatibility problems between UNO and MEGA board. The truth is that the UNO and MEGA board are not compatible with each other in some ways, for example, UNO SPI port pins are 10,11,12,13, Read more…

How ArduCAM use external trigger from a sensor

The ArduCAM shield has 6 general purpose IOs which can be set as input or output and greatly extend the power for the Arduino board which has limited IO resources. The structure of the IOs Read more… 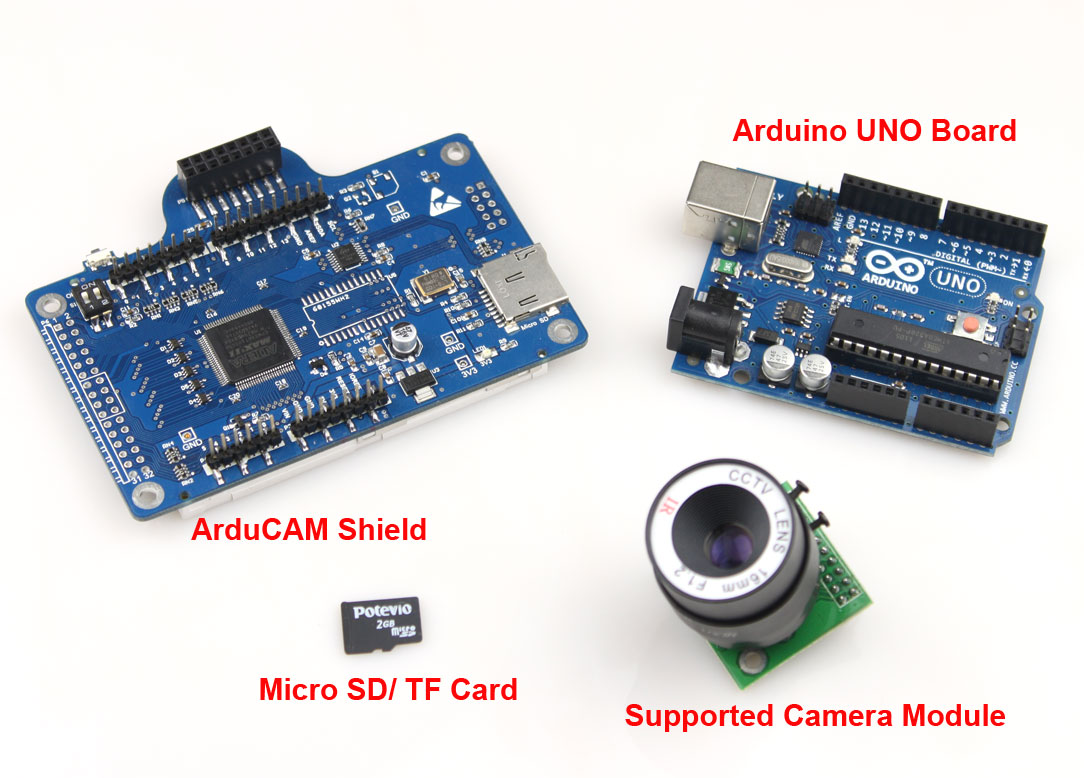 This tutorial will demonstrate how to use the ArduCAM shield on Arduino UNO board, aim the point and press a snapshot button you will get a BMP picture saved on the SD/TF card.