Not only do we improve existing camera solutions, but we also make the impossible possible.

How do we connect a camera module to Raspberry Pi?

To use a camera module on the Raspberry Pi, you need two things – A matching connector, and a matching camera driver. ​​

The Pi does come with a dedicated MIPI CSI camera connector, while occasionally the USB connector will also be used to interface a web camera.

Arducam offers both MIPI and USB camera modules to fit your needs. Besides, we also provide our camera drivers to enable the use of camera modules other than the official ones. What’s more, we can also make multiple cameras easier and better.

The V1, V2 and HQ Raspberry Pi cameras are considered native cameras, and they are supported by RPi’s official camera driver and ISP.

If you are new to the RPi, or not looking for an advanced application, please go with the native cameras. They will work with almost all the existing codes and tutorials that use native camera drivers or commands like raspistill/raspivid . They can surely cover most of the use-cases and would be the easiest way to start your Pi camera journey.

Take me to the native cameras

Currently, the camera modules based on OV7251 and OV9281 are available from Arducam.

Many people perform computer and machine vision tasks on RPi, in which they have to deal with fast-moving objects. A global shutter camera is an ideal solution to avoid the rolling artifacts for better image processing, but it’s not easy on RPi. ​​​​​​​​​ ​​​​​​​​​Arducam is one of the first companies […]

If the 5 native and migrated camera sensors officially supported by the Raspberry Pi don’t meet your requirements, you can take a look at the Arducam MIPI Camera Modules Series. 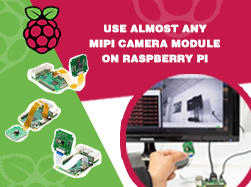 Raspberry Pi Camera Module V2 – What’s the problem? On May 14, 2013, the Raspberry Pi foundation announced the release of the first camera module board (5MP OV5647) for Raspberry Pi. Three years later, the V2 camera (8MP IMX219) was out with upgrades in resolution and image quality. Together with […]

Libcamera is the opensource library to enable the ISP pipeline from the Raspberry Pi’s GPU. Together with Arducam Pivariety solution, more sensors can be ported to the Raspberry pi flatform with a decent processed image instead of the original RAW data format.

Arducam libcamera variant solution helps users not only use the cameras natively unsupported by the official but also activate the ISP functions like AE, AWB, video encoding to improve the image quality.

If you are an advanced user and find that the native Raspberry Pi cameras don’t meet your requirement, you will soon be getting Arducam Pivariety cameras.

Pivariety is a Raspberry Pi platform V4L2 kernel camera driver framework that can support any MIPI cameras the Arducam provides which are not natively supported by the Raspberry Pi.

A single-camera driver for all cameras is the main goal of the Pivariety project, the end-users don’t need to develop their camera driver from scratch and can get more focus on their applications.

If you don’t want to use CSI-2 MIPI cameras, but want to try USB cameras for some reason. You can check the Arducam USB2.0 UVC camera solution from our list.

PT & PTZ Camera – Pan, Tilt, and Zoom to do more with a Single Camera

If you want to move the camera around, you need a pan-tilt mount. With a zoom lens added, you can zoom in to focus on the part you are interested in.

Multiple cameras on every Raspberry Pi? We Nailed it.

The multi-camera adapter board is a MIPI camera multiplexer, that allows a maximum of four MIPI cameras to a single CSI-2 MIPI camera interface, but only one camera can be activated at a time.

The Camarray Stereo Camera Solutions can connect up to 4 same type MIPI cameras at the same time and fully synchronized. It is useful for stereo vision applications like 360 camera, depth sensing, and multi-spectral vision.

Learn More
Subscription to Our Newsletter