Turning An Arduino Board into A Wireless Robot

About UCTRONICS :
This post is from the UCTRONICS team. UCTRONCIS is a major Arduino and Raspberry Pi components supplier and STEM products manufacturer. Inspired by Arducam IoTai, an ESP32-based board in the form factor of Arduino UNO with PSRAM, they’ve built a new wireless robot with a camera.

Robots made with Raspberry Pis and Arduino UNO

Humans have brains, and robots have microcontrollers. As the intelligent center to make the electronics parts smart, the Raspberry Pi and Arduino are among the most popular controller board for hobbyist robotics projects.

UCTRONICS is an electronics components supplier and has made a series of smart robots based on the previous two platforms.

Recently, inspired by Arducam, we are heading into a new direction – the ESP32.

Pros and Cons of the ESP32 Camera Board

If we are going to work on a new platform, we need to analyze the feasibilities. It’s necessary to look at the pros and cons of the ESP32 board.

The ESP32 is quite powerful and compact. Small as the module is, it’s packed with WIFI and Bluetooth abilities. These two integrated features are a big win over the traditional UNO boards which require other add-ons for wireless abilities. If the UNO is equipped with the two add-ons, the whole unit will be extra bulky compared to a compact ESP32 module.

It may require above-medium programming skills. The Arduino is powerful because of the huge ecosystem and ease of use. There are various add-on shields for the Arduino to complete all kinds of features, such as the SPI camera multiplexer shield from Arducam. The ESP32 is less beginner-friendly compared to the Arduino Platform.

From an IoT Camera to A Programmable Toy

This year, the ESP32 has officially upgraded with parallel camera support, and that is good news for us robot manufactures. UCTRONICS loves to make robots with visions, so the camera is a crucial part of it. We used a USB camera on the Arduino robot and MIPI camera on the Raspberry Pi one, but the ESP32’s native support of cameras just opens up more opportunities for us.

Then we see Arducam’s release of the Arducam IoTai board. It’s an ESP32-based development board in the format of Arduino UNO. The form factor and pinouts are the same to keep the compatibility with previous add-ons. It was initially designed for the IoT applications that need WIFI or BlueTooth to wirelessly communicate, especially for those involving image/video capturing or streaming.

That was an inspiration for us because the features of the Arducam IoTai board fit exactly what we expect from our robots. Besides, the native support of the parrel cameras like the OV2640 makes us more determined to adopt this platform in our next robot, which would be a robot that is more powerful yet more compact.

With this idea in mind, we started to build our new robot based on the Arducam IoTai. With the same pinouts, it did not take long before we finished the prototype, because we can easily get the components that have already been working on the Arduino platform to work on this new board.

Using this new ESP32-based board, we can solve many of the issues from our customer feedback. Especially the ease to use and install. For an Arduino UNO based board to work with a camera or wireless transmission, it would require a lot of add-on boards, which means more steps and difficulties in installing the robot. Apart from that, the more add-ons we have on the robot, the bulkier it becomes.

Thanks to the ESP32, which includes built-in WIFI and BT features, we can save a lot of space and make this robot a much smaller one. With some extra work, the users can use our new robot just like how they use the classic Arduino-based ones, whether it’s programmed by uploading sketches to the Arduino board in the Arduino IDE, or use a graphical programming software with which you can drag and drop to easily program the robot.

Another great thing is the camera part. It’s now dead simple to add a camera to the robot, and the whole cost of adding vision to the robot will be cut a lot. Currently, there are not too many compact robots with a camera on the market, and those for sale are also not cost-effective. This new solution makes our product more competitive in this way.

The UCBot: More Than A Robot Car

It’s easy to make a robot car, and I believe any toy manufacturer can make their version easily. However, it’s not easy to make a robot that is smart enough and educational enough to constantly inspire the users with what’s outside the amusement of the robot itself. With this new platform, the UCBot is more than a robot car, it’s a compact yet powerful autonomous robot with vision, and you can interact with it either with manual controls, preset auto modes, or programming.

UCBot supports easy Scratch-based drag-and-drop programming on the PC and the mobile devices. Despite the support of the Arduino IDE and ESP-IDF, UCBot pushes it further to catch up with the most prevailing method of program nowadays. Yes, you don’t need to write a line of code to give the robot a set of instructions to complete a certain task, instead, you can just drag and drop blocks with different features. This is a more natural introduction to the computer science world, especially for kids or young students. What’s more, you can program anytime anywhere with your phones or a tablet, so the convenience makes programming a part of life rather than a period spent before a desktop.

UCBot comes with vision and you can control it to explore the world. A creature without vision is not smart enough, but the UCBot sees the world with the 2MP camera. You can control the robot to move around with a mobile phone APP to explore the world from the robot’s perspective, which is fresh as well as exciting. You can also take pictures or shoot videos, whether it’s for surveillance or capturing a movement.

UCBot is a smart autonomous robot with built-in intelligence. Aside from the manual controls offered in our app, the robot also supports several auto modes. It can either follow or avoid an object in front of it, so you can let run around without knocking into any obstacles. Other self-driving modes are enabled by following a black line, and you can design a certain route for it, and it would follow that.

UCBot is an entertaining instrument, and it’s a piano that shines. With the joint effort of the buzzer and the phone app, you can play the piano on the user interface of the app, and the robot would sing with that. It also comes with preloaded songs that you can click to play. Decorated with the ambient light that you can customize, it becomes a mixture of beautiful sound and light. 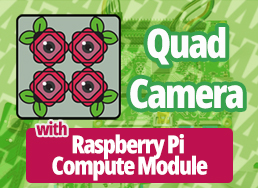 The Difference Between A Compute Module and A Raspberry Pi Most of us are familiar with the standard Raspberry Pi models, such as the Raspberry Pi 2, 3, 3B+, 4. Aside from these models for Read more… 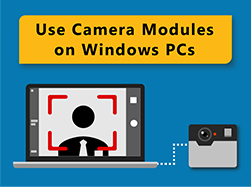 Cameras on the Windows Platform If you click the start menu on Windows 10, you will probably find an app called “Camera.” On a laptop, the app shows the built-in front-facing camera with some simple Read more… 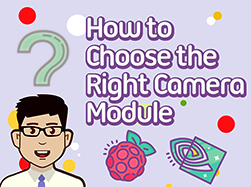 When it comes to developing a camera-related project on embedded systems like the Raspberry Pi (RPi) or NVIDIA Jetson Nano (NJN), we will take many factors into consideration. To help you better select a camera Read more…